It was with complete and utter awe that I watched the closing ceremony of the Great Britain Paralympics’ Games last night. As a writer, I try not to swear too much although, on occasion, my characters do. However, the spectacle of the end of the Games was indeed F*%>\ng Awesome.

It was reported that there would be fire and there was; the imagination of the director, Kim Gavin knew no bounds this time. He had apparently said not to look for the derivation of his inspiration for the set pieces; they were, as it transpired, fantastically fictional and doubtless, entirely from his own cerebral invention, much like when writers write science fiction.

Its story however conveyed the message that these games, the Paralympics’ Games, were about the greatness of people. People who, for various reasons, are disabled; from relatively minor injuries or abnormalities to unbelievably debilitating conditions that have a huge impact on their way of life.

Their recent battle against such adversity making achievements against all odds cannot, and must not, be simply for the sake of the past ten days. They have striven for Great Britain for years to qualify and subsequently win medals, but even the taking part is more than admirable.

Let’s not forget the Olympians of course, they too have, ‘done us proud’ coming third in the World, like the Paralympians, was also a fantastic achievement.

And the Gamesmakers, what a fantastic bunch of people, working long hours and managing to maintain a cheerful demeanour, it was almost like being in a US Disney park and just as clean.

Thankfully there were no antics from the warring factions of this World. It was really great to see our troops (and the Police) there in a peaceful role, enjoying their work, making the Games memorable for the right reasons.

So finally, for the disabled, it’s up to us, those who are able bodied and minded. The mood in the UK towards them has palpably changed; let’s keep it that way and afford them as much assistance as they need and deserve. Well done Team GB. 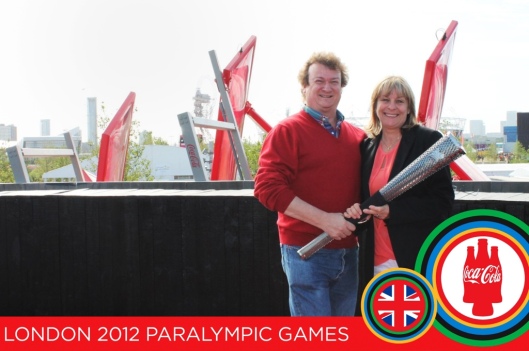 As I live in London now, last night, like the Olympic flame and at the same time as it was, I was in Edinburgh overnight. The reason being that yesterday evening, I gave an address at the prize-giving day at my old school, Trinity Academy in Edinburgh.

I had been asked to be the guest of honour and to give out the awards as a result of publication of my first novel, The Greatest Gift, a science fiction adventure thriller. I donated two copies to the school library and another hardback as an award to be given to The Greatest Trier in their studies.

The address was to an audience of four hundred pupils, parents and grandparents. The diverse cross section of ages was quite challenging to write for, but I think I hit the mark; at least everyone laughed at the correct places. A few people even came up to me afterwards and congratulated me on a ‘very inspirational speech’, which was great. As a bonus, afterwards, I even sold some books.

If you’re interested, read on, my speech notes are below.

It’s 40 years since I was here last but this hall is just as I remember it.

• Our qualifying dance was here as we progressed from Primary to Secondary.
• I attended assemblies here …
• and if my memory serves me well, I sat my exams here too.

However, one of my last recollections of school was waiting outside the Rector’s (headmaster’s) door.

It was just before my O levels. The Rector eventually called me in and gave me a lecture about not working hard enough. As usual, most of the words went in one ear and out the other,

But one sentence stuck. He said, “Balneaves, you will never make anything of yourself boy, “

I was thinking, ‘I’ll show you.’ But all I could muster was a feint, “yes sir” for fear of the slap of his three-tongued tawse over my palm.

Otherwise known as the belt, or ‘whistling Willie’ as one teacher used to call it, he kept his over his shoulder under his jacket and all he had to do was this (touch his shoulder) to cause a deathly hush in the classroom.

Corporal punishment, I’m sure you Mums and Dads will remember it.

Sadly … I mean thankfully, that’s a fate you boys and girls will never have to endure.
​
Anyway, the Rector’s reverse psychology worked because I sat for seven ‘O’ levels and passed them all.

I even passed English, my poorest subject and one I had given up on before the Rector’s dressing-down.

After ‘O’ levels, I had to leave for England; my Dad was a civil servant and was promoted, so we moved to London.

There, I attended Technical College for four years, achieving a Higher National Certificate in Construction by the age of twenty.

I returned to Edinburgh, I had never wanted to leave, leaving my parents down south.

My Uncle, who I was staying with, a dour Scot, told me I was mad to return and that I had, “Nae chance o’ a job in this toon (town).”

So, I wrote a little script of introduction highlighting my skills; took Yellow Pages (for you youngsters out there that’s a big yellow book with lots of phone numbers, that we used before Google) and made a shortlist of 30 Architects.

I phoned them all on a Friday afternoon after their lunchtime drink when I hoped they’d be relaxed and ready for the weekend. Of the thirty calls I made, I got three interviews and from those, one job.

One, is all I needed.

My uncle was astounded and told me I was lucky. It’s odd really, the harder I work, the luckier I seem to get.

After a couple of years here, I decided to return to London where I worked for a developer for a few years and then, at 25, I started the business that I still run.

So, I nearly failed English but wrote a book, how does that work?

Actually, no one was more amazed than I was.

It started at a time in my life, about 6 years ago, when I was busy with my Architectural and Surveying practice.

I was also learning to fly a helicopter and that involved seven ground exams as well as a minimum of 45 hours in the air and countless hours in preparation for the flying time.

Truth be known, I was probably a bit stressed and I ended up in an argument with my wife, probably trivial, you know, like not listening to her or something.

I said to her, “I’m so busy with my work and flying and I have half a book floating round in my head.” She simply said “Write it then.”

It’s a science fiction adventure novel called The Greatest Gift, it took me five years and it’s about,

all achieved by double hypnosis and the manipulation of DNA.

People have told me, “Everyone has one book in them.” I thought, I can do better than that so I am now writing a sequel … perhaps there could be more.

JK Rowling maybe needs to watch out for the new boy in town.

Some say it is and that they can’t put it down … Ok that was family and friends.

But seriously, a friend of mine, Mark Pearson, who with James Patterson, co-wrote ‘Private London’, has endorsed my book and I’m now starting to get some good reviews.

Writing a book is a mammoth challenge just like an exam but I did my writing a little at time, with persistence. If you adopt the same, “I can do this,” attitude you will succeed at whatever you approach.

Sometimes the difference between success and failure is measured only by the tiniest amount of additional effort.

Rise to the challenge; don’t just let it happen … I nearly made that mistake.

By the way, if you’d like a copy of my book, please see me afterwards.

I’ve always wanted to say that.